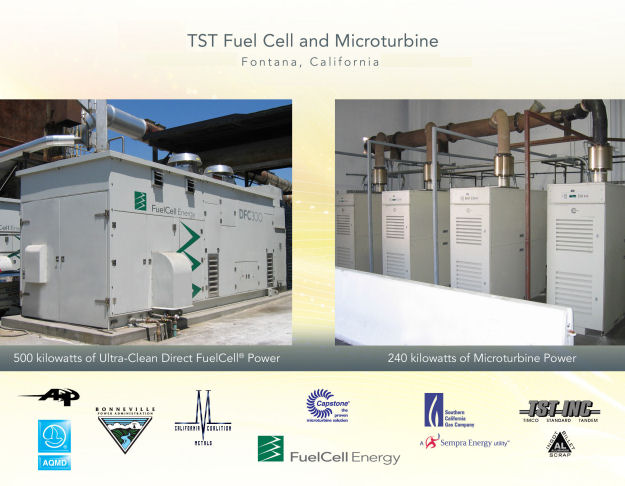 The unique element of this commercial project is that we are utilizing the ultra-clean generation power of stationary fuel cells.  The project was completed in 2006.  Fuel cells emit nearly zero emissions.  Hence, they do not harm our environment.  Also, on-site generation means less strain on our electricty grid, which helps the entire state manage its electricty consumption. Overall, a fuel cell is an electrochemical device that produces electricity efficiently, silently and without combustion.  To produce electricity, hydrogen fuel (which can be obtained from natural gas) is combined with oxygen (from air) to produce electrical energy.  The fuel cell reaction is similar to a battery with no moving parts, but the fuel cell will never run out as long as hydrogen and oxygen are fed into the system.

In addition to the fuel cells, four 60 kilowatt Capstone microturbines (provided by the SCAQMD) will be sited at TST/TIMCO (Fontana, CA).  The 240 kilowatts of microturbine electricity generation will work in conjunction with the ultra-clean fuel cells.


In 2003, CMC sponsored legislation to allow fuel cells to sell electricity back to the grid.
AB 1214 (Firebaugh - D) was signed into law: LINK